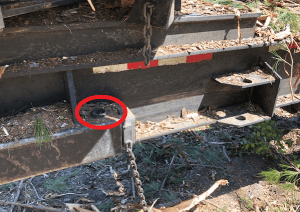 BACKGROUND:
On a warm summer morning in the southeastern U.S., a loader operator assisted other crew members in preparing a loader for movement to another job site.

PERSONAL CHARACTERISTICS:
The operator was in his forties and had worked in the woods for over 12 years. He had been employed with the current company for about two years. He wore all required personal protective equipment and was considered to be fully trained.

UNSAFE ACT AND CONDITION:
He helped pull the sliding tongue of the loader trailer out to prepare it for transport. As he went to insert the locking pin into a hole, it was blocked with debris. He stuck his finger in the hole to remove the debris.

ACCIDENT:
As he stuck his finger into the pin hole, the tongue shifted, then moved and pinched his index finger. Due to the weight of the parts, the crew had to use the skidder to pull the trailer’s sliding tongue out and relieve the pressure on the operator’s finger. The skidder alternated moving sides to prevent the tongue from becoming bound up.

INJURY:
The pinching action amputated the tip of his finger. The operator was driven to the hospital in a company service truck. His fingertip could not be reattached due to the extreme damage.

RECOMMENDATIONS FOR CORRECTION:
• Identify all pinch points on the equipment.
• Use a stick or screwdriver to clear debris.
• Do not stick body parts into areas when parts can shift.
• Address the importance of dealing with pinch points at monthly safety meetings.